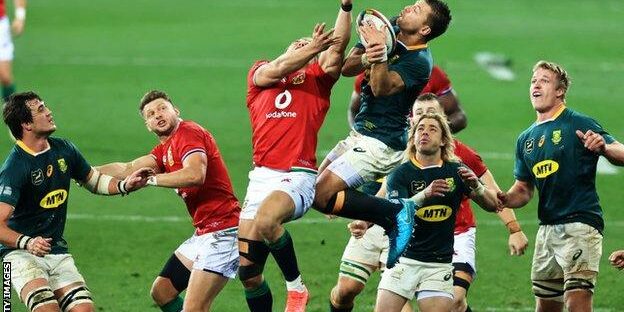 The British and Irish Lions drew first blood in the series against South Africa after fighting back from nine points down at half-time to win 22-17.

The tourists were adrift at the break after Handre Pollard’s four penalties.

But hooker Luke Cowan-Dickie scrambled over from short range four minutes after the break to change the tide.

The Lions survived a late onslaught when Owen Farrell’s penalty three minutes from time was followed by a desperate last-ditch attack from the hosts as they searched for a score-tying try in vain.

With the next two Tests to be played at the same sea-level venue, rather than Johannesburg as originally planned, the Lions will return to Cape Town Stadium in seven days looking for the kill and a first series win in South Africa since the iconic 1997 success.

South Africa’s winless streak in the city now stretches back to September 2014. The hosts, who have played only one Test in 20 months, will wonder how the match and momentum slipped away from them after a controlled and composed first half.

Twelve years ago, the Lions were caught cold by a Springbok blitz of hits and heft in the first Test. On that occasion they conceded a try inside the first five minutes and were 19 points down early in the second half.

Lukhanyo Am landed a huge hit on Elliot Daly in midfield, but, overall, the Lions of 2021 more than matched their hosts physically in the opening exchanges.

Instead, South Africa’s shrewd kicking game, forcing the Lions to play from deep, and the tourists’ occasional indiscipline, Tom Curry and Elliot Daly chief among the culprits, gave Handre Pollard four shots at goal and the Boks a 12-3 lead on the half hour.

Biggar and Elliot Daly both missed chances to cut the deficit from the tee, before Robbie Henshaw squandered the best opening either side had created in the final minute of a cagey half.

The Lions centre hared clear on a blind-side break after Biggar’s quick hands beat South Africa’s rush defence. However, with options on either shoulder, Henshaw couldn’t get a pass away before full-back Willie Le Roux dislodged the ball with a superb cover tackle.

The game opened up in the second half with Cowan-Dickie burrowing over at the back of a rolling maul that steamrolled through the heart of the Springbok pack four minutes after the interval. The Lions rarely looked back.

Lions coach Warren Gatland had placed South African video official Marius Jonker under the microscope earlier in the week, questioning why there was no alternative neutral TMO when New Zealander Brendon Pickerill was unable to travel to South Africa.

The spotlight duly swung on Jonker with two hair’s-width calls in the space of two minutes after Cowan-Dickie’s score.

First, Jonker overturned referee Nic Berry’s on-field decision, ruling out Willie Le Roux’s try for an offside that only he could see for certain.

Shortly after, Jonker could not see any evidence of a knock-on from Pieter-Steph du Toit as Makazole Mapimpi’s kick ahead caused chaos and De Klerk dotted down in the fray.

But that score could not stop the momentum slipping away from South Africa.

The hosts, playing only their second Test since their Rugby World Cup final win in November 2019, looked long on fatigue and short on stamina.

Their much-vaunted bomb-squad front row – Frans Malherbe, Malcolm Marx and Steven Kitshoff – failed to deliver the expected edge in the scrum as they arrived off the bench.

And Lions’ coach Warren Gatland’s faith that South Africa would fade if they kept the tempo high and the ball in play was eventually borne out to the delight of the entire squad who spilled onto the pitch at the final whistle.

Gatland and his coaches came to their selection meeting earlier in the week with only seven unanimous picks in their various starting line-ups.

In the unlikely event that Maro Itoje was not one of them, he certainly will be when the backroom reconvene ahead of the second Test.

The England second row, a talismanic figure in the drawn series against New Zealand four years ago, was once again supreme, scrapping for every inch and pilfering breakdown ball, including one critical turnover in the shadow of his own posts.

Courtney Lawes was a more contentious choice in the starting back row. But his abrasive ball-carrying and appetite for work saw him wrestle his way into the ascendancy as the match wore on.

The performance of the replacement front row – Mako Vunipola, Ken Owens and Kyle Sinckler – may give Gatland food for thought as well, particularly given Cowan-Dickie’s brief wobbles at the line-out in the first half.

Man of the match – Courtney Lawes