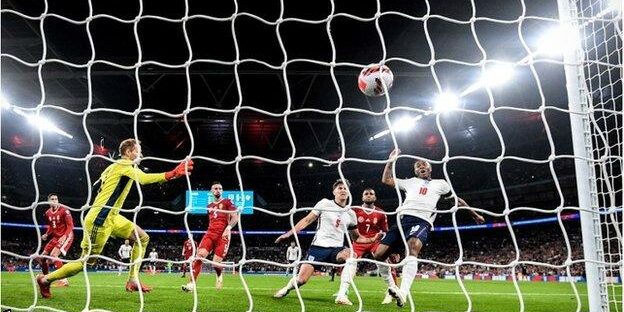 England’s path to the 2022 World Cup hit an unexpected stumbling block when they were held to a draw by Hungary in a qualifier Gareth Southgate called a “big disappointment”.

Southgate’s side are still in pole position to reach Qatar but this was a disjointed display despite England taking on the Hungarians with an attacking line-up.

The early stages at Wembley were overshadowed by ugly scenes involving Hungary fans, who jeered England’s players while holding up a banner protesting against taking the knee before clashing with police and stewards.

In a subdued atmosphere and after a semblance of order had been restored, Hungary took the lead in the 24th minute when Luke Shaw was penalised for a high challenge on Loic Nego and Roland Sallai sent Jordan Pickford the wrong way from the spot.

England were level before half-time, John Stones turning in at the far post after Tyrone Mings and Declan Rice touched on Phil Foden’s free-kick.

Hungary then survived in relative comfort, Harry Kane’s struggles for form summed up when England’s captain was substituted even though they were searching desperately for a winner.

“I don’t think we played at the level we have done and Hungary defended very well. We didn’t do enough to win the game,” Southgate told BBC Radio 5 Live.

“I don’t know if subconsciously we thought this was going to be an easier game because we beat them comfortably [4-0] in September but they’ve been very good defensively right through the summer.

“In the first few minutes we were taking heavy touches and colliding into tackles. We didn’t show the composure and quality that we have done generally.”

Kane’s search for form goes on

The notion of Kane being taken off as they pressed for a winning goal might have been unthinkable at one point but he could have no complaints here when he was replaced by Tammy Abraham with 14 minutes left.

It came just after he had snatched at a chance in a manner which reflected a striker searching in vain for form and confidence.

This was the first time he failed to score in a qualifier for England since September 2017, a run of 15 goalscoring games in a row.

Kane’s performance was very average throughout, a shadow of the player who has been a spearhead for England for so long.

He had set up a chance for Raheem Sterling just before he was taken off. Sterling, one of a record five Manchester City players in England’s starting line-up, could not cash in and was also taken off at the same time as Kane. He is another who is currently nowhere near his best.

Kane will surely bounce back but it was a display that once again poses the questions about how much he has been affected by a summer of speculation when he wanted to leave Tottenham for Manchester City but eventually had to stay in north London.

He does not look himself and the sooner the old spark returns the better for England and Spurs.

Southgate gave the public what they wanted by fielding an England team with just one holding midfielder in Declan Rice and letting the talented triumvirate of Foden, Mason Mount and Jack Grealish loose on Hungary.

Foden and Grealish had their moments although Mount was quiet as England lacked the attacking thrust to apply serious pressure and break down a well-organised Hungary defence.

It was a surprise when Grealish was replaced by Bukayo Saka just after the hour. It certainly came as a surprise to many in the Wembley crowd who loudly registered their disapproval, although Saka was given a rapturous welcome.

With Kalvin Phillips injured and Jordan Henderson on the bench, England’s attack-minded selection left them more open to a counter-attack. Hungary did threaten on occasions but they were not good enough to accept the invitation. Better teams might so Southgate has certainly been given food for thought and will learn lessons from this.

England are still on course to go to Qatar but this was a disappointing performance in what was a largely dull encounter, with most of the attention sadly focusing on the clashes between Hungarian fans and police and stewards moments after the kick-off.

This was a highly unsatisfactory night all round, although Hungary celebrated their hard-earned point after the final whistle.

England are three points above second-placed Poland with two qualifiers to go next month.

“We’re in a very strong position in the group but tonight is a big disappointment,” said Southgate. “We have to make sure we get it right next month.”

England need four points from a home game with Albania and trip to San Marino.