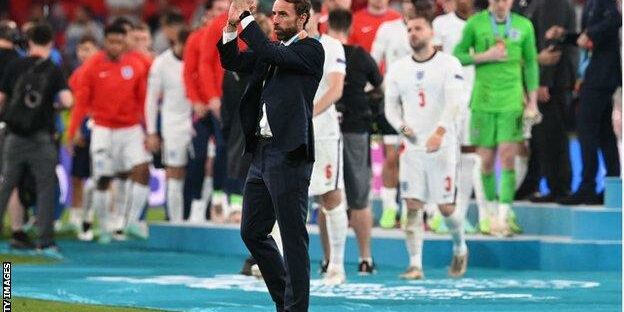 England’s bid to end their 55-year wait for a major trophy ended in the familiar agony of defeat in a penalty shootout as Italy claimed the Euro 2020 crown at Wembley.

On a night of anticipation, tension and ultimate heartbreak in a feverish atmosphere, England looked on course for their most joyous day since 30 July 1966 when Luke Shaw gave them the perfect start after two minutes.

Italy, unbeaten in 33 matches before this final, slowly edged their way back into the game and were level in the 67th minute when Leonardo Bonucci pounced after England goalkeeper Jordan Pickford turned Marco Verratti’s header on to a post.

And after a tense period of extra time failed to find a winner, it was on to penalties and bitter disappointment for England manager Gareth Southgate and his players, who had gone into this final on a wave of expectation and high emotion.

England missed three of their five penalties, Marcus Rashford hitting a post and Gianluigi Donnarumma denying Jadon Sancho before – so cruelly for such a fine young player – Arsenal teenager Bukayo Saka also saw the giant Italy goalkeeper save his spot-kick.

Harry Kane and Harry Maguire were on target for England while Pickford kept hopes alive with saves from Andrea Belotti and Jorginho while Domenico Berardi, Bonucci and Federico Bernardeschi scored for Italy.

The tearful 19-year-old Saka, who showed such courage to step forward, was consoled by England team-mates and manager Southgate but there was no real consolation for them or the expectant fans packed into Wembley.

England’s years of hurt go on but it looked for the first 30 minutes of this final that the moment the country has waited more than 20,000 days for had finally arrived.

Southgate’s side came firing out of the blocks and the manager’s one change of replacing Saka with Kieran Trippier paid an instant dividend as he ran on to Kane’s perfect pass to find the onrushing Shaw at the far post and he slammed an emphatic finish past Donnarumma.

England were up and running and urged on by a vast, frenzied crowd they had this talented, streetwise Italian side on the back foot until they suddenly gained a foothold in the closing phase of the first half.

Italy dominated possession, England lost impetus and it was no surprise when they restored parity, then looking the more likely winners as Southgate’s side, so full of running early on, started to labour, particularly after losing the outstanding Declan Rice to a knock.

Southgate surprisingly waited until extra time to introduce Jack Grealish but by that stage the game was locked on course for penalties and so it proved.

He introduced Sancho and Rashford in the closing moments, presumably in readiness for penalties, but sadly for Southgate, who has got so much right in Euro 2020, this was one move that did not pay off as both failed with their spot-kicks.

Pickford performed heroics to save two penalties but he was also left in tears after England’s fate was sealed.

Italy edged over the line and both Southgate and his players looked devastated as they took sympathetic applause from England’s fans, who had arrived with such high hopes but filed out of Wembley with their dreams of a major trophy shattered once more.

England came close when they reached the semi-final of the World Cup in Moscow in 2018 but this loss will cut even deeper after they made such smooth progress to the final and had the chance to finally claim a second trophy in what was effectively a home tournament with its climax at Wembley.

They have made progress – but still England could not clear the final hurdle.

England’s loss will be felt deeply after such impressive progress through the knockout stage with wins against Germany, Ukraine and Denmark.

Southgate must now digest whether he got it right in the final when it came to his approach, substitutions and penalty takers but when the dust settles England can reflect on progress made.

England took one step further than they did in Russia and Southgate now has a potent blend of youth and experience to work with as he plots a course to the 2022 World Cup in Qatar.

Saka came of age in this tournament while England have exciting young in the shape of Sancho, Phil Foden, Mason Mount and Jude Bellingham, augmented by Grealish.

Raheem Sterling had had a stellar campaign, Kane showed flashes of his world-class ability and the central defensive pair of John Stones and Maguire were solid. Pickford also made an outstanding contribution in goal.

This will offer no comfort in the hours following such a devastating loss, but England can at least move forward with optimism.

As Italy’s players and staff celebrated in front of their exultant fans, manager Roberto Mancini was left to reflect on an outstanding job, their 34th game unbeaten crowned with the Euro 2020 title.

Mancini has put together an impressive mix of youth and experience, and at the back he can still rely on those two old warhorses of Juventus and Italy, Bonucci and Giorgio Chiellini, as durable as ever despite a combined age of 70.

Italy proved their pedigree with wins over Belgium and Spain in the knockout stage and were unfazed by having to face a thunderous Wembley packed with England fans.

And all done after failing to qualify for the 2018 World Cup in Russia, which was regarded as a national sporting humiliation.

Now Italy are back as the winners of Euro 2020, testimony to the work of Mancini and his players.