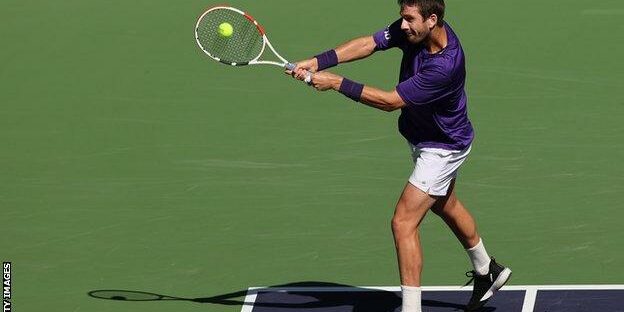 Britain’s Cameron Norrie hailed the “biggest win of my career” after he beat Argentina’s Diego Schwartzman in straight sets to reach the semi-finals of the Indian Wells Masters.

World number 26 Norrie will replace Dan Evans as British number one after his 6-0 6-2 win in California.

The 26-year-old left-hander had never previously reached the last eight of a Masters 1000 tournament.

Norrie will face Bulgarian Grigor Dimitrov in the last four.

Norrie dismantled the world number 15 in 73 minutes for his 45th win on the ATP Tour this season.

Speaking after the win, Norrie said: “It was such a big moment for me playing my first Masters 1000 quarter-final, especially against Diego.

“I thought I was in for an absolute battle. It’s probably the biggest win of my career. I’m really happy with the way I handled everything.

Victory over Schwartzman, who Norrie also beat in the first round of the 2020 US Open, should give the Briton enough ranking points to break into the world’s top 20 for the first time in his career.

“With Diego you have to be careful. He snuck through a couple of matches already this tournament. I had to keep my foot down and was able to get that second break and relax and play some great tennis,” added Norrie.

Speaking on Amazon Prime, former British number one Greg Rusedski said: “It’s been an incredible performance from Norrie. The best tennis I’ve ever seen him play to dismantle Schwartzman. He’s now got a great chance to reach his first final. In my opinion it was probably his best performance on a tennis court.”

Schwartzman was unrecognisable from the player good enough to qualify for last year’s ATP Finals in London, but Norrie showed no signs of tension in a first Masters quarter-final.

He broke the Argentine’s serve six times out of seven. I lost count of the number of times Schwartzman dejectedly put his hands on his hips as another point went against him.

Norrie now has 45 wins this year, which is one more than Novak Djokovic, although he has played significantly more tournaments.

He may have done enough to make his top 20 debut next week, and will definitely replace Dan Evans as the new British number 1 on Monday.

Norrie says that means little to him, and it is perhaps a position which could change hands with more regularity in the months ahead.