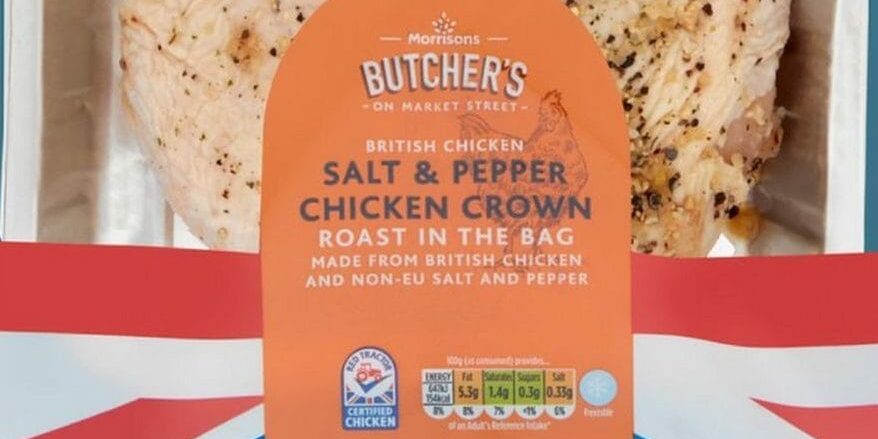 Morrisons has been forced to redesign some of its food packaging after Remainers threatened to boycott the supermarket chain because they were offended by labelling on chicken that mentioned “non-EU salt and pepper”.

“Why have Morrisons apologised for following rules originally imposed by the EU? They must have turned chicken,” said David Jones, the deputy chairman of the eurosceptic European Research Group.

“And who are they apologising to? People who are such fans of the EU that they would prefer a supermarket to break the law?,” the Tory MP for Clwyd West added.

The label for the roast in the bag garlic and herb chicken reads: “Salt and Pepper Chicken Crown. Roast in the bag. Made from British chicken and non-EU salt and pepper.”

Some members of the public took issue with the label. “Tell me Morrisons that this is not real. Your response will dictate whether or not I ever shop at your stores again,” Lee Williscroft-Ferris, a writer, said on Twitter.

“US-owned Morrisons stokes anti-EU hatred,” tweeted “Kristina #FBPE”. “Won’t be going back until this is withdrawn and an apology is issued.”

A Morrisons spokesman said: “Our chicken label is adhering to British packaging regulations, however we will be redesigning it to make it clear this is not a political commentary.”

Brussels rules require the “non-EU” label on packaging when products contain ingredients from more than a single country outside the bloc.

The regulation on country of origin labelling was introduced in the EU in April 2020. It took effect in the UK, even though it had legally left the bloc on January 31, because Britain was in the Brexit transition period.

The UK followed all EU rules and adopted new ones coming into force during the period, which ended about eight months after the labelling rules came in.

The regulation was copied into UK law when Brexit took legal effect on December 31. Suppliers have until October 2022 to change the label to state “non-EU” instead.

The non-EU label will still have to be retained by Morrisons, but is likely to be less noticeable in the redesigned packaging.

It is not the first time that Morrisons has become embroiled in controversy over Brexit and food.

In Christmas 2019, it caused a social media sensation after removing the word “Brussels” from bags of Brussels sprouts.

Instead, sprouts were sold as Lincolnshire or Yorkshire sprouts, depending where they were grown, much to the delight of some Brexiteers.