‘My flight home was booked for two weeks ago’ 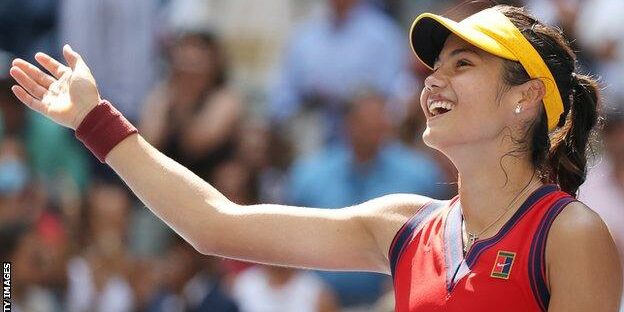 British teenager Emma Raducanu’s run to the US Open semi-finals was so surprising even to her that she had booked flights back to the UK a fortnight ago.

The 18-year-old Briton is the first qualifier to reach the last four of the Grand Slam in New York.

“My flights were booked at the end of qualifying, so it’s a nice problem to have.”

The rapid rise of Raducanu continued as she reached the semi-finals at Flushing Meadows with a straight-set win over Swiss 11th seed Belinda Bencic on Arthur Ashe Stadium on Wednesday.

As a result Raducanu, who passed her A Levels earlier this summer, is set to rise to the cusp of the world’s top 50 and will become the British women’s number one.

“It definitely means a lot to be in the semi-finals,” she added.

“I’m just really enjoying the experience. Out there on the court, I was saying to myself, this could be the last time you play on Ashe, so might as well just go for it and enjoy everything.”

One downside to the surprise run is Raducanu’s parents, Ian and Renee, have not been able to see any of their daughter’s matches first hand.

Neither will they be able to see Thursday’s semi-final – against Greek 17th seed Maria Sakkari – because of the strict travel restrictions to the United States.

“It’s not possible, because you need a waiver and it takes a couple weeks for approval. It’s too late and they won’t be able to get one,” Raducanu said.

With a wide smile she added: “I haven’t actually called my parents for quite a while. Earlier this week they were ghosting me, but when we speak – because I have been away for so long now – they just really want to see how I am.”

Raducanu has become the first British woman to reach a US Open semi-final since Jo Durie in 1983, while Virginia Wade was the last to win the title in 1968.

Wade watched Raducanu’s match against Shelby Rogers on Monday, with the younger Briton addressing the 76-year-old during the post-match victory interview and describing her an “absolute legend”.

More recently, three-time Grand Slam champion Andy Murray won the men’s tournament in 2012 as part of his journey to becoming a British legend.

Former world number one Murray, 34, has practised with Raducanu at the National Tennis Centre in Roehampton in recent times, as well as playing against the teenager in mixed doubles at the Battle of Brits exhibition event last year.

Tim Henman, another notable British former player, who reached the US Open semi-finals in 2004, has also been watching Raducanu from courtside at Flushing Meadows in his role as a television analyst.

“I think that their presence and everything that they have achieved is inspiration in itself for me. We have some great role models to look up to,” Raducanu said.

“I personally haven’t spent that much time with them, but Andy has quite often on occasion spoken to me and I actually hit with him two times, which was really good for me to see his ball speed and how good he is.

“All are such great role models and figures for me to follow.”

How the teenagers are showing the future is bright

Raducanu’s success comes as a host of young stars have filled the absence of several big names – in particular Serena Williams, Roger Federer and Rafael Nadal – with superb performances.

On the men’s side, Spain’s Carlos Alcaraz, 18, is another teenager who has showcased his ability on the biggest stage.

With Raducanu having joined Fernandez in the last four, it is the first time since 2009 that two teenagers have progressed to the US Open women’s singles semi-finals.

Asked how Fernandez’s success is inspiring her, Raducanu said having so many young players doing well showed “how strong the next generation is”.

After revealing Fernandez had handed out cupcakes in the locker room to celebrate her 19th birthday earlier this week, she added: “Layla is really nice. Everyone is on their own trajectory, though.

“I’m here taking control of what I can control and it is my own journey at the end of the day.

“I think to compare yourself and your results against anyone is probably like the thief of happiness.

“I didn’t compete for 18 months [because of the coronavirus pandemic], but here I am, and it just shows that if you believe in yourself, then anything is possible.”