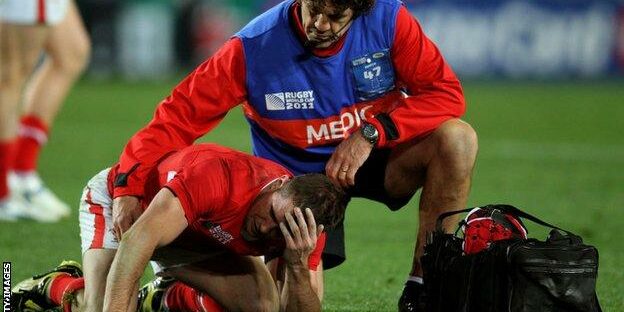 One season of professional rugby could be enough to see a decline in a player’s blood flow to the brain and cognitive function, a new study claims.

The University of South Wales research followed a professional rugby team over the course of a season, testing players pre-season, mid-season and post season.

It will be published in Wednesday’s September edition of the Journal of Experimental Physiology.

Researchers followed a team playing in the United Rugby Championship.

They say more research is needed on the long-term effects.

Their study, seen exclusively by the BBC, has found that over just one season a team of professional rugby players saw a decline in blood flow to the brain and cognitive function – the ability to reason, remember, formulate ideas and perform mental gymnastics.

The paper also suggests that rather than only concussions, repetitive contacts, or sub concussions, sustained through rugby have caused the declines seen in the players.

Former Lions and Wales player Shane Williams suffered head injuries himself while playing, and says the risk of a player getting injured increases when they are tired.

He has joined calls for a limit on replacements, because fresher players coming on to the pitch could cause more damage.

Some of those former players have been diagnosed with early onset dementia, and they claim the authorities failed to protect them from the risk caused by concussions and head impacts.

‘Has my memory deteriorated because of the hits I’ve taken?’

Former Wales winger Williams took some big hits and head impacts that affected him in his career, none more so than in a thumping but legal tackle by South Africa’s Bakkies Botha in 2004.

“It wasn’t until I got back to the hotel several hours later that I realised I wasn’t very well,” he told the BBC.

“That was one of the biggest hits I’ve ever taken really, I think.

“It was a blur getting changed afterwards – seeing the players, seeing family members in the stadium afterwards, I don’t remember – it was almost like I’d blacked out for a couple of hours and the next thing I’m in the hotel again sat in the reception thinking: ‘Gosh what happened there?'”

When considering the impacts he’s taken over the years, Williams has questioned whether his brain has been affected by the game.

Head Injury Assessments, or HIA protocols, which now are commonplace on the field of play and are there to help decipher whether a player has had a concussion, did not come into force until 2015.

Williams feels if the same incident in 2004 happened now – and knowing what he now knows – he would have taken himself off the field.

“I think a big part of it is education – if I’d have been hit like that today I’d have known straight away that something wasn’t right,” he said.

“People still ask ‘would I have changed the way I played, would I have not played?’ I wouldn’t have, because I played a game that I absolutely loved.”

What does the new study say?

Some studies suggest professional rugby players may be exposed to 11,000 contact events per season, and more research is beginning to show evidence that it may not be concussions alone that could impact the brain, but the cumulative effect and volume of contact events too.

The peer reviewed University of South Wales study, which is funded by the Royal Society Wolfson Research Fellowship, recorded six concussion incidents among all the players that took part over the course of the year.

However, all of those involved in the study saw a decline in blood flow to the brain and cognitive function between pre and post-season results.

The team involved plays in the United Rugby Championship – formerly the Pro14 – and has not been named to maintain confidentiality in accordance with research governance guidelines.

Professor Damian Bailey, one of the authors of the study, said: “Even over a short period we’re seeing from the rugby players a greater rate of decline in brain function.

“And we’re assuming our baseline is a normal healthy baseline but many of these players have already had many years playing the game, so that baseline is probably still impaired.”

Further findings include a correlation between an increase in contact amount, playing position and rate of decline on the main measures tested.

“Because the forwards are involved in more contact, as one would expect, we’re seeing a greater degree of impairment relative to the backs,” Prof Bailey explained.

This paper focuses on one squad of professional players over the course of one season, so can any comparisons be drawn between the professional level and at grassroots?

Prof Bailey says professional players have less opportunity to recover and repair, much bigger physiques, and potentially bigger impacts as a result of contact, but amateurs may have arguably poorer technique and be putting themselves at risk because of that.

“It’s difficult to say, but we don’t think why it would be terribly different,” he said.

“The bigger question and what’s really motivating this research is to then look into the future, to have a snapshot of what are the long-term consequences of this reoccurring contact?

“We have every reason to believe that the damaging effects could be cumulative over time.”

The university team are also working on a similar study, comparing current players and retired players against a control group to determine whether there is a faster rate of decline in brain function in rugby players. They say more research is needed on the long term effects of such a decline.

According to the RFU, 20% of all concussions at a professional level occur in training.

In American football’s NFL in the United States, measures have been put into place to limit the amount of contact during training and between training sessions, something that has been called for by a number of former rugby players.

However, others such as Williams say it is difficult to put a cap on contact in training as practising good technique also reduces injuries.

Recently a group of former players called for replacements to only be used if players are injured, something Williams also believes could be of benefit, along with education.

“I do believe the game has changed when it comes to the ‘finishers’ [replacements],” he said.

“You’ve got 21-stone players coming on to the field when players are tired and you get injured more when you’re tired.

“But another main thing for me is educating the players so that they know when they do have these injuries.”

The sport’s governing body, World Rugby, says research is ongoing looking at the specific issue of replacements and injury.

What does World Rugby say?

In a statement responding to the University of South Wales research, the sport’s governing body World Rugby said: “World Rugby welcomes all research that can inform and support our recently launched strategyexternal-link to cement rugby as the most progressive sport on player welfare.

“It is at the heart of everything that we say and do as a sport.

“We are currently undertaking a wide-ranging evaluation of contact training volume across the game and look forward to the results of the ongoing Otago Rugby Community Head Impact Detection study using instrumented mouthguards, which is the largest study of playing and training head impacts in men’s and women’s community rugby.”

The body added that the Otago study is due for completion imminently.