The sanctions being placed on Russia by western nations 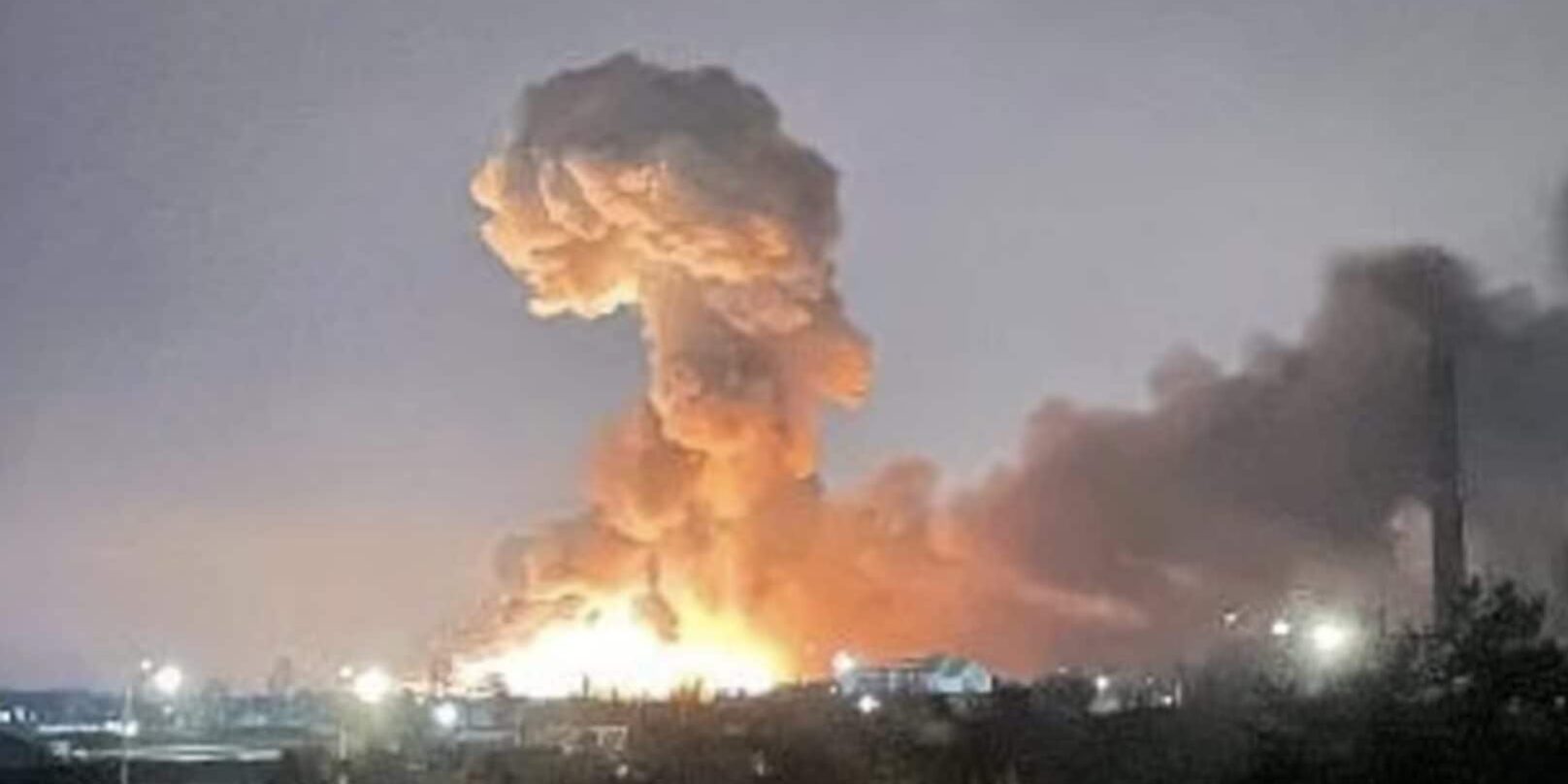 Vladimir Putin has ordered Russian troops across the border and into Ukraine, launching a full-scale invasion.

Announcing a ‘military operation’ in the Donbas region in the early hours of Thursday 24 February – the Russian President has effectively declared war on Ukraine.

The US President, Joe Biden, has said the “prayers of the world” are with Ukraine.

Boris Johnson, who announced the “first barrage of UK economic sanctions against Russia” earlier in the week, made a statement on Thursday to confirm the “largest and most severe package of economic sanctions that Russia has ever seen”.

Starmer had met the Ukrainian Ambassador to the UK earlier in the day and said: “Labour stands with the Ukrainian people. The hardest possible sanctions must be taken against all those linked to Vladimir Putin, now.”

What are the sanctions imposed by the UK?

Boris Johnson announced on February 22 that in the initial package of sanctions Britain would be sanctioning five banks and three individuals.

Rossiya Bank, İşbank, General Bank, Promsvyazbank and the Black Sea Bank will all be targeted. Gennady Timchenko, Boris Rotenberg and Igor Rotenberg are the three “very high net worth” individuals who were sanctioned.

“Any assets they hold in the UK will be frozen,” the Prime Minister said. “The individuals concerned will be banned from travelling here and we will prohibit all UK individuals and entities from having any dealings with them.

“This is the first tranche, the first barrage of what we are prepared to do and we hold further sanctions at readiness to be deployed alongside the United States and the European Union if the situation escalates still further.”

The UK will sanction members of the Russian Duma and Federation Council who voted to recognise the independence of Donetsk and Luhansk.

But, following Putin’s invasion, Mr Johnson went further and announced the “largest and most severe package of economic sanctions that Russia has ever seen”.

On Thursday, along with the US, the UK is establishing a full asset-freeze of VTB, the Russian state-owned bank. The powers will also allow the UK to exclude Russian banks from Britain’s financial system.

The Prime Minister also announced that the Government will place a limit on the amount that Russian nationals can deposit in their UK bank accounts and that sanctions will also be applied to Belarus for its role in the invasion.

He added that asset-freezes will be added to over 100 new entities and individuals.

The UK Government’s ten-point barrage of sanctions set out in full are as follows:

The latest sanctions were made after new legislation introduced earlier this month gave ministers powers to target companies and/or individuals “carrying on business of economic significance to the government of Russia”.

The statutory instrument also gives the Government the ability to target companies in sectors of “strategic significance” such as energy, financial services, and information technology, as well as those supportive of the Russian Government and its ambitions in Ukraine.

Having imposed business sanctions on Russia, Mr Johnson previously insisted there is “no chance” of football tournaments being held in Russia in the wake of Vladimir Putin’s current activities.

The 2022 Champions League final has since been switched to Paris after Uefa stripped Russia of hosting rights. European governing body chiefs will confirm later that the match will be at the Stade de France as St Petersburg is no longer tenable.

However, there remain diplomatic complications for Uefa which has an ongoing deal with Russian energy giant Gazprom – the main sponsor for the stadium in St Petersburg.

Uefa is also expected to confirm on Friday that Spartak Moscow’s next home game in the Europa League cannot take place in Russia. The last-16 draw is due to take place at midday. The announcement heightens pressure on Fifa to make a decision ahead of Russia’s involvement in World Cup play-off matches next month.

What are other countries doing to impose sanctions on Russia?

The European Union’s chief executive has said “massive” sanctions against Russia will be presented to the bloc’s national leaders – for approval later today.

European Commission President Ursula von der Leyen said that Putin “is responsible for bringing war back to Europe” and confirmed that the new EU sanctions would block Russia’s access to “key technologies and markets”, as well as freezing the country’s assets in Europe and stopping its access to European financial markets.

German Chancellor Olaf Scholz said on Tuesday 22 February that he would halt the certification of Nord Stream 2 after Russia’s incursion into eastern Ukraine.

“Given Russia’s latest action” the certification “cannot go ahead”, Mr Scholz said. “This is now about taking concrete steps relating to the situation that we have seen now.”

The White House said that “as President Biden promised, we worked with Germany to ensure the Nord Stream 2 pipeline will not move forward”.

Earlier this week, The White House listed Russian elites who are coming under sanctions and said they would “share in the pain” inflicted on the Russian Government. They are Sergey Kiriyenko, the First Deputy Chief of Staff of the Presidential Administration of Russia, and his son Vladimir; Alexander Bortnikov, the head of the Federal Security Service (FSB), and his son Dennis; and Petr Fradkov, chief executive of Promsvyazbank.

“Other Russian elites and their family members are now on notice that additional actions could be taken on them as well,” a senior US official said.

The sanctions Mr Biden announced on Tuesday 22 February amount to “only the sharp edge of the pain we can inflict”, the official said at the time.

“If Putin escalates further, we will escalate further using both financial sanctions and export controls, which we have yet to unveil.”

The president also directed that the Secretary of the Treasury would determine that any institution in the financial services sector of the Russian Federation economy is a target for further sanctions.

On Thursday, Biden spoke once again to confirm that the sanctions are in place to maximise long-term impact on Russia and minimise impact on Europe.

He estimated that the measures will cut off more than half of Russia’s high-tech imports and confirmed that the sanctions would include Russia’s VTB Bank.

It was also announced that the US would be imposing sanctions on 24 Belarusian individuals and entities over their support for the Russian invasion of Ukraine, as well as two state-owned banks in Belarus – Belinvestbank and Bank Dabrabyt.

A senior US administration official confirmed on Thursday that America still has room to further tighten sanctions if Russian aggression escalates further.

On Wednesday 23 February, Japan followed the US and the UK in announcing sanctions.

Japan’s prime minister, Fumio Kishida, said he is imposing sanctions including prohibiting the issuance of Russian bonds in Japan and freezing the assets of certain Russian individuals.

Mr Kishida, who also called on Russia to return to diplomatic discussions, said he did not see a significant impact on energy supplies in the short term from the current situation and said further steps would be considered should the situation worsen.

Australia announced a second phase of sanctions against Russia, with Prime Minister Scott Morrison condemning what he called an “illegal invasion” of Ukraine.

Sanctions against 25 individuals, four entities involved in developing and selling military gear, and restrictions on four financial institutions have been declared.

The Prime minister said: “Australia always stands up to bullies. And we will be standing up to Russia, along with all of our partners, and all those who believe that it is totally unacceptable that Russia could invade its neighbour.

“Our intention today, and the decisions taken by the National Security Committee, will ensure that we are in lockstep with the United States and the United Kingdom in the sanctions that they are imposing upon Russia.

This article is kept updated with the latest information.