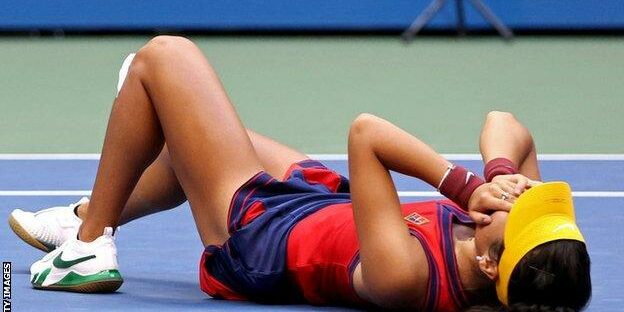 Emma Raducanu ended Britain’s 44-year wait for a women’s Grand Slam singles champion as she beat Leylah Fernandez to win the US Open in the most thrilling style.

The 18-year-old ended her scarcely believable run in New York with a 6-4 6-3 win over her 19-year-old Canadian opponent in a high-quality final.

Raducanu threw herself to the floor in disbelief as she fired down an ace to conclude what has been the most remarkable journey.

Raducanu served for the match at 5-3 but cut her leg as she went break point down, leading to a medical time-out and a clearly irritated Fernandez expressing her frustration to the match official.

However, Raducanu shrugged off the delay, saving a further break point before closing out her third championship point.

The two shared a warm hug before Raducanu headed up the stairs at Arthur Ashe Stadium to celebrate with her support box.

Raducanu was cheered on by an emotional Virginia Wade, who was the last British woman to win a major trophy at Wimbledon in 1977.

“It means so much to have Virginia Wade here and also Tim Henman,” Raducanu said in her on-court speech.

“They are British icons and for me to follow in their footsteps gave me the belief I could do it.”

With the victory, Raducanu becomes:

She will take home £1.8m in prize money, rise to 23 in the world rankings and will become the British number one on Monday.

Raducanu will also know that she has starred in one of the biggest moments in British sporting history – and captured the imagination of the fans at home and in New York.

The rise & rise of Raducanu

Astonishing. Ridiculous. Meteoric. Unbelievable. Take your pick – but no word can ever really sum up what Raducanu has achieved.

Two weeks ago, Raducanu had a flight booked back to the UK, just in case she did not come through qualifying in New York. Seventeen days later, she has lifted the trophy in front of a rapturous crowd.

Raducanu did not just come through qualifying: she dominated it. The most games she lost in one set in her entire run in New York – five – came in the second round of qualifying.

It is not just that Raducanu has kept on winning, but she has done it with such dominance. She did not drop a set en route to the final, despite meeting Olympic champion Belinda Bencic and in-form Maria Sakkari on the way.

In the big moments, she has held her nerve, trusting in her power and serve, even when she saw two championship points go by in the final.

This is someone who, two months ago, was collecting her A-Level results. She only made her WTA main-draw debut in June. All this has happened so quickly, and yet not once has Raducanu not looked like she belongs.

With all the attention on Raducanu after Wimbledon – as well as questions from some about her mental toughness – she could have easily been overwhelmed.

Instead, she trusted in herself, hired a new coach in Andrew Richardson and went to America to play in the various events.

No-one could have seen this coming; not the ease with which Raducanu would brush her opponents aside, or the calmness with which she would approach every match.

But Raducanu always believed. And she will leave New York as the US Open champion.

Former British number one Laura Robson on BBC Radio 5 Live: “There are so many sliding doors moments. Before Wimbledon, Emma didn’t have a main draw wild card. Would she be in this position if they hadn’t upgraded it? Would this happen if she hadn’t had to retire from the fourth round with breathing problems?

“She played an almost perfect performance in her first Grand Slam final. You have to think there will be so many more.”

Former Wimbledon champion Pat Cash: “I cannot believe it. It is unheard of for a qualifier to win the US Open. Goran Ivanisevic won Wimbledon as a wildcard but he had already been to Wimbledon finals, not playing a second Grand Slam.

“She hits so cleanly. I cannot come up with a reason for this to happen. It does not make sense at all. Her performance is mindboggling.”

BBC tennis correspondent Russell Fuller: “I have never seen anything like this and I suspect if I work in this business for another 20 years I won’t see anything like it.”

A full Arthur Ashe Stadium – which holds almost 24,000 people – is one of the most intimidating sights in tennis, but neither player looked fazed as they walked out on to the biggest stage of their career.

Fernandez had more of the crowd support, given that she has ousted the second, third and fifth seed in New York, but there was still good support for Raducanu.

The first three games lasted for 23 minutes, both players showing a devastating array of cross-court punches and fiery returns of serve, and they traded breaks as they found their footing.

As she has done throughout the tournament, Raducanu dug herself out from 0-30 down several times, stepping forward, playing more aggressively and finding her first serves.

That gave her the confidence to attack Fernandez’s second serve and put herself on top. She closed out the first set with a forehand down the line, turning and pumping her fist towards her box before letting out a yell of “come on!” to the crowd as they rose to applaud.

Fernandez has shown tenacity throughout the tournament and she did so here, saving three break points in her first service game to stop Raducanu taking a 2-0 lead in the second.

She then found the break, adjusting to hit Raducanu’s serves better, and it looked as though the momentum had swung the way of the young Canadian.

However, there is a reason Raducanu has not dropped a set in New York. At the changeover she sat quietly, eyes closed, before again increasing her tempo and creating the break opportunity.

She broke with the shot of the match – a stunning forehand pass, made from almost off the court, that left Fernandez stranded at the net.

Two championship points came and went on the Fernandez serve, saved once again by brave hitting, but Raducanu did not falter despite taking a nasty cut to the leg as she slid behind the baseline.

It was an odd interlude in what was an entertaining final that proved that the future of women’s tennis is bright.