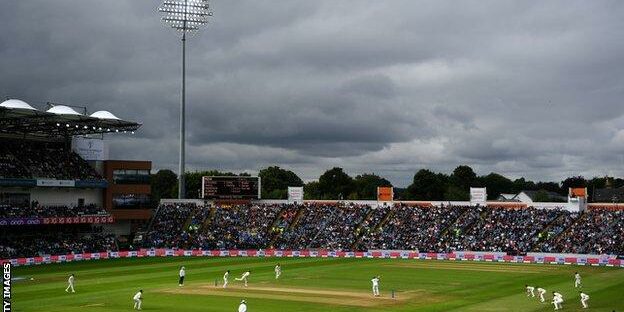 Yorkshire have been suspended from hosting England matches as the England and Wales Cricket Board delivered a devastating rebuke over the club’s response to racism experienced by former player Azeem Rafiq.

An investigation found Rafiq was a victim of “racial harassment and bullying” – but the club said it would take no disciplinary action.

The ECB board says the ban will last until the club has “clearly demonstrated that it can meet the standards expected”.

Meanwhile, a number of members of the Yorkshire board are set to announce their resignations on Friday before an emergency board meeting, BBC Sport understands.

The board is under pressure after criticism from the ECB, sponsors and the UK government over its handling of the Rafiq case.

The ECB said it was “clear” Yorkshire’s handling of the issue was “wholly unacceptable and is causing serious damage to the reputation of the game”.

A statement said: “Given recent events, it is clear there are serious questions regarding the governance and management of YCCC.

“The club’s failure in relation to actions and responses to their own report represent a significant breach of its obligations to the game.”

The fallout from Yorkshire’s response to the racism report intensified on Monday when ESPN Cricinfo reported a racist term about Rafiq’s Pakistani heritage was regularly used towards him, but the investigation concluded it was “friendly and good-natured banter”.

Yorkshire’s Gary Ballance, who has admitted using racist language towards ex-team-mate Rafiq, has been suspended indefinitely from England selection.

On Thursday evening, former England captain Michael Vaughan revealed he was named in the report but denied any allegation of racism.

Julian Knight MP, who called for the Yorkshire board to resign this week and is chair of the Digital, Culture, Media and Sport committee, said he hoped the sanctions handed down by the ECB would “act as a short, sharp shock to bring the club to its senses”.

“Like the rest of us, I imagine the members of Yorkshire County Cricket Club will be questioning why the board is still in place,” he added.

He said it would have been “completely unacceptable” were Ballance still eligible for England.

Headingley is due to host a men’s Test against New Zealand and a men’s one-day international against South Africa in 2022.

The Leeds ground is also scheduled to host an Ashes Test against Australia in 2023.

Kit suppliers Nike and several sponsors have cut ties with the club.

The ECB board has also asked the ECB executive to commission a review, looking into whether of Yorkshire’s leadership is fit for purpose. A full ECB investigation into the matter remains ongoing.

Financial and further match allocation punishments could be given at the end of the ECB’s investigation.

Following Thursday’s statement, Rafiq, 30, said: “I need a little time to reflect on what the ECB has said this evening and the actions they’re proposing to take.

“I will not be commenting further at this time.”

How did we get here? The 15-month scandal

Yorkshire’s investigations began in September 2020 after Rafiq, who played for Yorkshire between 2008 and 2018, claimed “institutional racism” at the club left him close to taking his own life.

After more than a year – and having been asked to do so by MPs – Yorkshire released the findings of an independent report in September which upheld seven of the 43 allegations made by Rafiq.

But the club said no players, coaches or executives would face disciplinary action following the club’s own investigation into the report’s findings.

That move – and subsequent claim that the report judged the use of a racist term as “banter – has now led senior politicians, including health secretary Sajid Javid, to criticise the club.

Senior Yorkshire officials have been called to attend a DCMS select committee hearing on 16 November, where Rafiq will also give evidence.

Ballance, who has not played for England since 2017, said on Wednesday he “regrets” using the offensive terms.

2 September 2020: Following an initial interview with Wisdenexternal-link, ESPN Cricinfo publish an article with Rafiqexternal-link in which he claims “institutional racism” at Yorkshire County Cricket Club left him close to taking his own life.

3 September 2020: Yorkshire say they have launched a “formal investigation” into the claims made by Rafiq and chairman Roger Hutton says the club would be carrying out a “wider review” of their “policies and culture”

5 September 2020: Yorkshire ask an independent law firm to investigate racism allegations against the club by Rafiq.

13 November 2020: Rafiq says he hopes to bring about “meaningful change” after giving his first statement to the inquiry.

15 December 2020: Rafiq files a legal claim against Yorkshire “claiming direct discrimination and harassment on the grounds of race, as well as victimisation and detriment as a result of trying to address racism at the club”.

2 February 2021: Yorkshire threaten a lifetime ban for anyone found to have made threats against Rafiq or his family and legal team, after ESPN Cricinfo show them messages sent to Rafiq’s legal firm.

17 June 2021: An employment tribunal case between Rafiq and his former club Yorkshire fails to find a resolution. The independent investigation into his racism allegations remains ongoing.

16 August 2021: Yorkshire receive the findings of an independent investigation into the racism allegations and, two days later, the England and Wales Cricket Board (ECB) asks for a copy.

19 August 2021: Yorkshire, yet to release the findings of the report at this stage, admit Rafiq was “the victim of inappropriate behaviour” and offer him their “profound apologies”.

Rafiq accuses Yorkshire of downplaying racism by calling him the victim of “inappropriate behaviour”.

8 September 2021: MPs tell Yorkshire to publish the findings of the report “immediately”.

10 September 2021: Yorkshire release the findings of the report, which says Rafiq was the “victim of racial harassment and bullying” and seven of the 43 allegations made by the player were upheld by an independent panel.

According to Hutton, the report said there was “insufficient evidence to conclude that Yorkshire County Cricket Club is institutionally racist”.

Yorkshire released a summary of the panel’s report and recommendations, but said the full report could not be released for legal reasons “in relation to privacy law and defamation”.

8 October 2021: Yorkshire miss a deadline to send the full report to Rafiq and his legal team after BBC Sport understands an employment judge ordered the club to release it in full by Friday, 8 October.

13 October 2021: Rafiq then receives a heavily redacted version, while the ECB says it is still awaiting the full report.

28 October 2021: Yorkshire says it carried out its own internal investigation after the findings in the report and concluded that “there is no conduct or action taken by any of its employees, players or executives that warrants disciplinary action”.

2 November 2021: The Digital, Culture, Media and Sport select committee calls on Hutton to appear before it to answer questions about Yorkshire’s handling of a report into Rafiq’s allegations of racism.

MP Knight, chair of the DCMS select committee, calls on the board of Yorkshire County Cricket Club to resign after a leaked report emerges apparently containing details of the investigation into the treatment of Rafiq.

A story published by ESPN says the report had concluded that a racially offensive term used towards Rafiq was regarded as “banter”.

Knight makes his comments after health secretary Javid calls for “heads to roll” at Yorkshire and said if the ECB did not take action “it’s not fit for purpose”. He further states in a Twitter post that the term allegedly used to describe Rafiq was “not banter”.

The ECB announces it will conduct a “full” investigation into the situation.

3 November 2021: The date of the DCMS hearing is scheduled for 16 November and Rafiq is called to give evidence in person, along with senior Yorkshire officials.

4 November 2021: The ECB board suspends Yorkshire from hosting international matches.